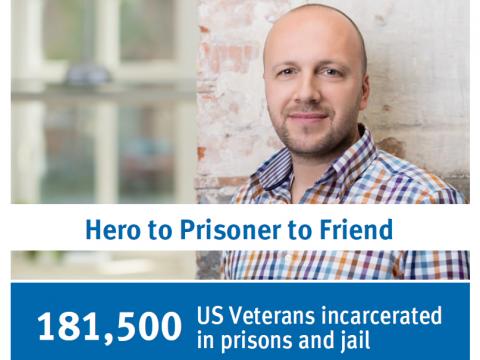 Hero to Prisoner to Friend

Ted was a decorated officer in the armed forces who served in the West Pacific, the Middle East, and one deployment to Bosnia. He attained the rank of Major after completing his graduate studies and served as Team Leader with a training battalion preparing soldiers for service in Afghanistan, Bosnia, and Iraq.

After leaving the military, Ted’s fall came quickly and dramatically after committing a crime he now regrets deeply. From a position of respect and command Ted became an “offender” serving 10 years in prison and five more on parole.

Ted counts as his biggest loss the fact that he has not had contact with his children for over 15 years. Holidays are difficult.

Amicus became both a resource and a cause for him after release. He found steady employment, housing, and even recently remarried. He was able to connect with others who understood what he was going through and did not judge him. He found friendships and even became a volunteer spokesperson, helping others understand that even heroes can fall, and one needs friends for the climb back up.