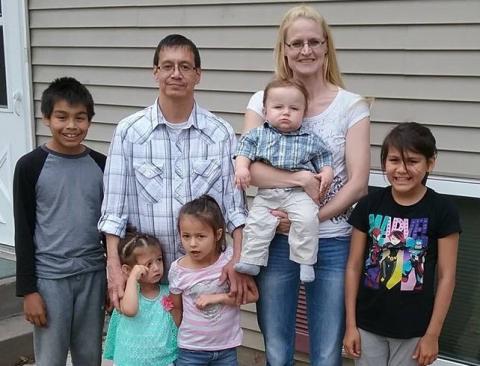 "She was there when I went to detox. Rather than judging, she addressed it as a problem and said 'Let's see what we can do about it.'"

We’ve all felt stuck, alone and in need of support. That’s what rock bottom feels like. We know when we’re there, but what we need is a reason to hope and a path back up.

Eric was at rock bottom when he and his family moved into one of VOA MN/WI’s supportive housing communities in Wahkon, MN. His history of alcoholism had led to chronic homelessness for his whole family of four children and Eric’s partner Kelly gave birth to a fifth child while they were staying with us.

Eric relapsed into alcoholism shortly after moving in. Instead of finding his family out on the streets again, Eric found stability and understanding through Lori, a manager in the supportive home.

“She was there when I went to detox,” Eric recalled. “Rather than judging, she addressed it as a problem and said, ‘let’s see what we can do about it.’”

Lori was the coach in Eric’s corner, promoting accountability and assisting Eric to gain access to a treatment program. Lori also worked with Eric’s children who were struggling with the fear of losing their home yet again and maybe going into foster care.

One year later, Eric has remained sober and is actively involved in his family and in the community. With Lori’s help, Eric landed a job at the local grocery store, and he was later promoted to Department Manager.

There are still struggles, but his family is healing now and they’re living in their own four-bedroom house!

With resources like Lori, community, and grit, Eric's family and others like them can find a path to who they've always wanted to be: good parents, loving spouses, thriving kids and contributing members of our community.